Home / News / Where Technology, Is The Name Of The Game

Yesterday marked the opening of EmTech Singapore,
the first conference of the year that gathers likeminded emerging technology
buffs from around the region to share their ideas and innovations. I walked
into the hall filled with excitement and curiosity at what EmTech Singapore will
bring to the table this year. The hall was quickly packed to the brim with more
delegates than there were actual seats, anticipating the start of the
conference.

The atmosphere was rather quiet making
EmTech seem like a very solemn affair instead of a semi-formal sharing of the
minds. Audiences were generally shy and quiet when it was time to pose questions
at the guest speakers. Thankfully host Jason Pontin who is the editor in chief
of MIT Technology Review, did a good job carrying the show along and should be
awarded the gold medal for actively trying to engage the audience throughout
the day.

The conference went on with just some
slight glitches in time management. Many speakers took the stage, sharing their
views on emerging technology and how their nifty innovations will benefit all
of us in time to come.

A few innovations and speakers stood out
from the crowd of tech geeks: 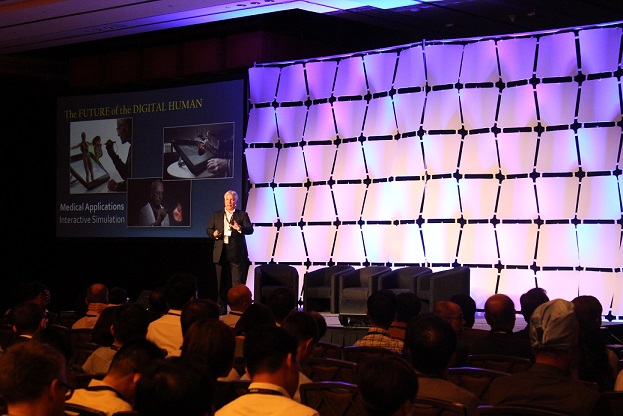 Like right out of a
Star Trek movie, holographic technology is closer to us now than
what it seems to be. Holographic technology has been used for movies like
Benjamin Button and the Polar Express to resurrecting the King
of Pop,
Michael Jackson for a sold
out concert.

Rudy who is currently the CEO of PULSE
BioLogic, spoke about their current project in perfecting haptic feedback in a
holograph for the medical industry. The feature will allow the user to touch
and feel the holographic image as though he is really touching the object. Meaning
the doctors who are performing a surgery on a holographic image of the brain
can actually feel the sponge like texture of the brain. PULSE BioLogic is
looking at introducing this to doctors in training, who need to undergo surgical
procedure practice. If successful, this will lower the need for cadavers that
can only be used once. Holographic technology will not produce any biowaste in
that sense and will be able to provide doctors in training with more
opportunities to have hands on experience. 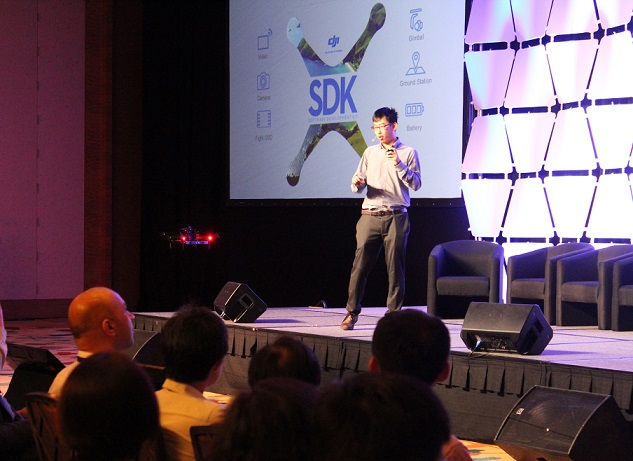 So apparently it is illegal in the land of
the free (America), to fly a drone in an enclosed area like a conference hall.
But that did not stop DJI’s Director of New Technologies to do so yesterday. It
was the highlight of the entire conference to have a working drone fly and
hover in mid-air, especially when many like myself have never seen one in
flight!

Guyue gave a brief introduction to the
history of drones and the many possibilities it holds. DJI is looking at the agriculture industry, with particular attention to farming and forest
inspections. Drones built with infrared cameras can easily monitor the health
of crops and cover larger distances over a period of time as compared to
driving a truck through hundreds of hectares. Forest inspections will also be
easier now if conducted by drones, forest fires or illegal logging can now be
detected earlier. Authorities can be alerted earlier to put out fires once it
starts before it spreads and help capture illegal loggers.

The
Gal Who Made Robogals, Marita Cheng 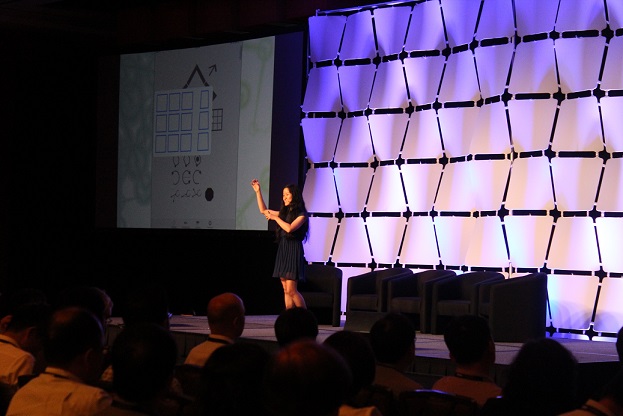 ‘But no one turned up for the first meeting’,
reminisced Marita. Founder of the highly successful international social
initiative Robogals, now CEO of 2Mar Robotics, Marita Cheng is a bubbly speaker
who engages the audience with small anecdotes of her well learned setbacks and
successes she had when forming Robogals.

She founded 2Mar Robotics and has since
left Robogals to be managed by the student members of Robogals. 2Mar Robotics
was formed shortly after she graduated with a few other robotic fanatics, in a
bid to use robotics to help patients suffering from spinal conditions or have
movement constraints. Currently 2Mar Robotics is working on perfecting a
robotic arm that can be controlled with a Smartphone app. The robotic arm is
able store pre-programmed movements, stow away nicely when attached to a
wheelchair and able to perform basic functions. 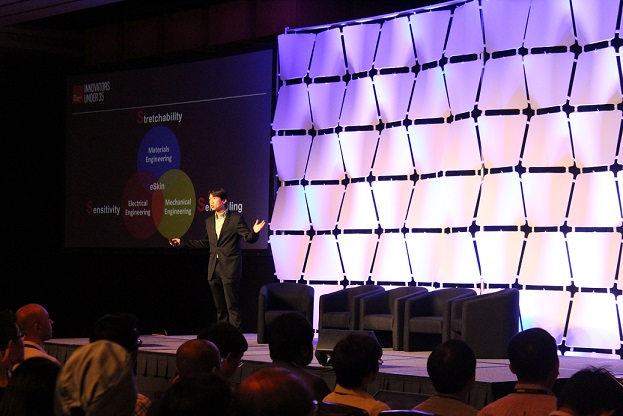 Fancy a skin that can rapidly heal itself
like comic character
Wolverine’s?
Well, Benjamin who is from our little red dot has invented an electronic skin
that can do just that! Benjamin who is also a recipient of this year’s EmTech’s
Innovators Under 35, says the electronic skin is something to look out for
because it will go far beyond just healthcare. Imagine space ships constructed
using the self-healing material. Astronauts will no longer have to make the
dangerous trip out of their space shuttle to repair broken parts and maybe even
survive a small meteor storm.

EmTech Singapore is an annual 2 day event that
is organised by Koelnmesse which ended today. There were definitely more hits than misses,
EmTech Singapore brought to the table many interesting speakers that spoke with passion about where
technology will be in the near future. These speakers also brought into focus
some really nifty inventions that will enhance the technology we have today,
bringing it to an entirely new level. I leave EmTech Singapore with new found
respect for the scientists who exhibited sincere enthusiasm and passion for their respective fields of science; impossible is now the new possible.