What if our computers can communicate intelligently with us?


What if our computers can communicate intelligently with us?

You’ve heard us right, or this is at least, a glimpse of the future shown to us during the Microsoft Developer’s conference 2016 held at the National University of Singapore Cultural Hall on the 27 th of May. We saw Satya Nadella, CEO of Microsoft on stage and heard first-hand about his vision for the world, which he believes will be human-to-computer interaction. This event was held to empower developers, to lend Microsoft’s expertise and support towards Singapore’s Smart Nation initiative, and to work with the National University of Singapore to establish a new course about Data Science.

Conversations as a platform

During the keynote address at the event, Satya Nadella, asserted that we exist in a shift which he called “conversations as a platform”. He spoke about a reality 5 years from now where all our devices, our homes and our workplaces are intelligent enough to speak with us, understand our needs and help us with our tasks more efficiently. Mr Nadella said “What if you can take the most innate ability that all humans have which is the understanding of human language and bring that to all computers and computing around us?” 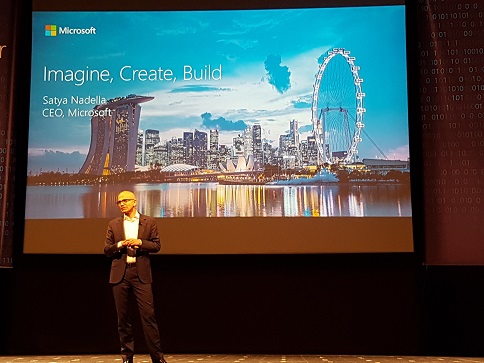 “What if our computers could understand us perfectly and respond to us?”

Mr Nadella described this future which eliminated the need and cognitive load involved in the navigation of multiple user interfaces, the struggles in deciding which programs or apps you need, and instead challenged us to imagine a future where we could simply speak to our devices, and the right application with the right context will automatically open to help us get things done. With home artificial intelligence already in the market with products such as the Amazon Echo, and Google also investing heavily into artificial intelligence development, this is a reality that is imminent rather than a far flung fantasy.

Part of this future which Microsoft envisions for developers, consumers and professionals in every industry involves augmented reality taken even further. He said “For the first time, our field of view itself is an infinite digital display.” He calls this platform “mixed reality” where Microsoft wants to bring the analog world and virtual space together.

He also describes the possible applications in various industries such as, medical students studying holographical representations of organs, architects being able to create virtual constructs of their ideas, interior designers showing clients accurate virtual representations of their concepts to show their clients and how mixed reality could change entertainment and gaming in a profound manner. 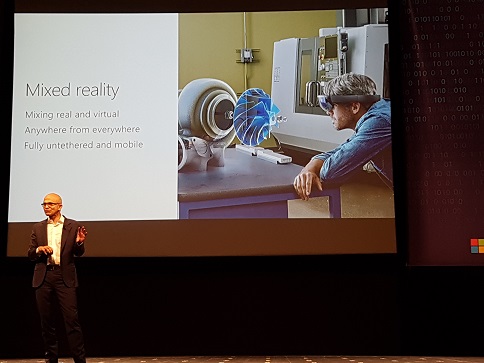 Satya Nadella speaking about a future powered by mixed reality

Mr Nadella also emphasized on the importance of fostering local ingenuity and, Microsoft’s involvement in local education to prepare a new generation of Singaporeans to become experts in the handling of data science which Mr Nadella described as the “new currency moving forward,” to harness the power of data in developing applications to impact our lives in many profound ways.