What You Will Soon Be Getting From Apple in 2015


What You Will Soon Be Getting From Apple in 2015

Apple is going through a big deal of improvements from its Iphone, OS, to its smart home systems. Get ready to be benefitted from these changes very soon this year, if you are a big fan of Apple. These changes were unveiled at Apple's WWDC 2015, which is the World Wide Developers Conference held from 8-12 June in San Francisco. 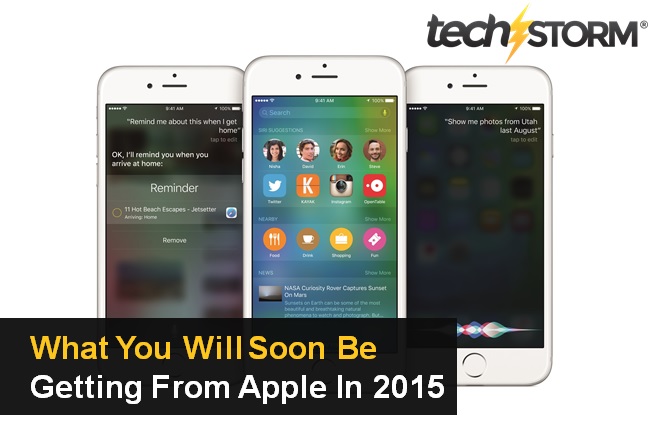 Minor changes were introduced in OS X 10.11 “El Capitan”, but they are also pretty useful. You can now pin sites from Safari, so they will load instantly on the landing page. Spilting your screen in between apps and software will be easier too, as multiple desktop layouts will be stored in a navigation bar on top.

IOS 9 is here too

It's quite cool what a few changes to an app can do to make it more productive and worth using. IOS 9 is banking on this concept, by making small improvements to its Notes App to include the functionality to draw, its HealthKit to be able to track UV exposure and menstrual cycles, and a “low power mode” for a few hours more battery for your Iphone. Be more productive with your Ipad Air 2, as you can now open two apps side by side and use them simultaneously.

Know how to take the public bus using Apple Maps

Before this new version, you could not get public transit directions like the bus or subway information using Apple Maps. In short, it is only for pedestrians or people who drive. Now, it has become much more useful especially to navigate big cities using public transport.

This new music streaming service was launched at Apple WWDC 2015, and it can be a real threat to Spotify. It brings music downloads, streaming radio and music service into one single app. The service will cost US$9.99 a month, or $14.99 for a family plan of up to six individuals, with a three-month free trial. There is also a new feature called Connect that lets artists, well, connect more intimately with their fans by sharing photos, videos and messages.