If you are looking out for a new phablet, tablet or Smartphone, you got to see the beauties Samsung will be releasing in the coming weeks. Samsung has just unveiled their Galaxy Tab S2 in 2 sizes (8.0” and 9.7”) and the slimmest Galaxy Smartphone yet, the Galaxy A8 4G+.

This is the latest installment to Samsung’s Galaxy Tab S series with some serious upgrades to its display and more importantly weight. 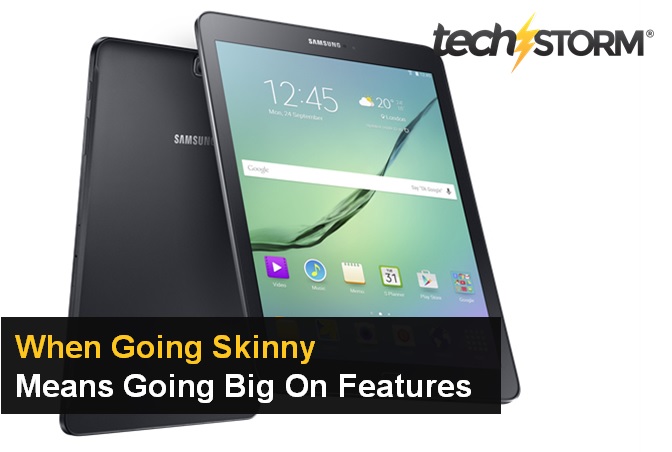 The Tab S2 is further elevated with a SUPER AMOLED display that has been optimised for reading, watching videos or for viewing any type of content. All this while providing you with more precise details and deeper colour contrasts. In addition, we are really glad that Samsung hasn’t taken the option of an expandable memory slot of this gadget. The Tab S2 has an in-built memory palace of 32GB with a MicroSD slot that is capable of supporting up to another 128GB.

If you do like to stream shows or are a closeted social media stalker, you would be glad to know that the Tab S2 is equipped with 4G+ LTE Category 6 capability. This means twice as fast Internet access for all your daily needs – Think speeds of up to 300Mbps. The Tab S2 has a whopping 5870mAh/4000mAh battery, which is more than sufficient for a day’s worth of regular usage, game time and watching videos on-the-go.

However, with all the glints and glamour comes the down side. The Tab S2’s camera specifications are a bummer. Its rear- facing camera is 8MP with a 1.9 f aperture while its front-facing camera is 2.1MP. Question: Tablet and phablet users don’t take pictures?

The Tab S2 is not your regular tablet or phablet that just allows you to watch shows or play games on a larger screen. The device comes preloaded with Microsoft Office Solutions, so you get to create, edit and view documents on-the-go without having to turn on your computer. Did we mention that, you get 100GB of cloud space via OneDrive free for the first two years to backup all your important documents?

Samsung’s really serious when it comes to letting you and I read PDF documents and e-books without straining our eyes. With Reading Mode, it automatically tunes the screen’s brightness level to lessen the strain on our eyes – No more squinting our fellow book worms!

Ever wanted to project what you are looking at on your tablet on to the TV at home or during a presentation? With Quick Connect, it is now possible. The Tab S2 is able to automatically recognise Samsung Smart TVs once paired and able to share anything you want without the hassle of third-party applications or wires.

You might be wondering ‘A8? Didn’t Samsung just come up with S6 not too long ago?’ Well, they are not the same. Just think of the A series as the more affordable range as compared to the S or Note series but still pack with some great features.

This runs on the latest Android Lollipop 5.1.1 version, equipped with Qualcomm Snapdragon 615 Octa-Core processor and 2GB of RAM. Talk about being slim, the A8 measures just 158x76.8x5.9mm and weighs 151g. This makes the A8 is the slimmest full metal Galaxy Smartphone Samsung has ever launched to date! Don’t let its slim figure fool you, it still manages to pack a high battery capacity of 3050mAh.

At first glance the A8 4G+ can be easily mistaken for the S6 or even Note 4. Mostly because of its really large 5.7” Full HD SUPER AMOLED screen with a pixel intensity of 480ppi and narrow metal bezel. It might sound like a really large device to carry around, especially since it technically has the same screen size as a Note 4. However, when held it still manages to fit snuggly without feeling too large.

Like the Tab S2, the A8 runs on 4G+ LTE Category 6 which is capable of super-fast speeds of up to 300Mbps which makes streaming shows on-the-go a breeze. Yes, the specifications (even to us) are starting to sound like a hybrid of the Tab S2 and Galaxy S6 put together.

The awesome part about the A8 is its camera. It has a 16MP rear-facing camera and 5MP front-facing camera, both with an amazing 1.9 f aperture for better images taken in dim light. Aside from the regular Beauty Face and Night modes for the front-facing camera, there is also the Wide Selfie and even Animated GIF modes! Perfect for group shots during a gathering or capturing your beloved pet doing something completely GIF-worthy.

If 32GB of in-built memory is not sufficient, the A8 boasts a dual-SIM feature that doubles up as a MicroSD slot gives you the flexibility of having up to an additional 128GB of memory. In addition, the A8 is preloaded with Samsung KNOX. This is a mobile security platform that protects your entire device while separating your personal and corporate data. Well, sometimes it is not just corporate documents that need protecting. Other raunchy and intimate documents can also be well protected and stored safely away from prying eyes and threats.

The Galaxy Tab S2 is available in Black, from 7 th August 2015 onwards and retail prices start at SG$598 for the 8.0” 32GB Wi-Fi only model. The Gold version will be available at a later date.

If these beauties still haven’t managed to capture your heart, how about the Galaxy S6? Read all about it here.