Home / News / Fancy An Entire Library on the Go?

Lightweight and portable, that’s exactly what e-book
readers are all about

Let’s face it, even though we enjoy the
smell and touch of a new book or the experience of flipping pages, it is
difficult and cumbersome to carry books around especially when you may be out
for an entire day. We get it, it is hippie-like and somewhat trendy to be
carrying a book around, but why only have a couple of books with you when you
could have your entire library without the weight?

Well yes, you can always read and store it
on your Smartphone. However, the glare and amount of battery it drains is more
than enough to put most off that idea. So here’s our top three picks on the
best e-book readers to keep your mind busy when in transit or at the café! 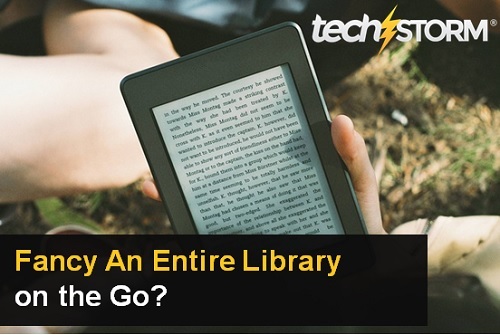 For those who have not heard of Kindle,
they are the grandfather of all e-book readers and first introduced them almost
two decades ago in November of 2007 and it has come a long way since then. The
Kindle Voyage is one of the thinnest Kindle every produced at 7.6mm and is designed
with the reader in mind. As with other Kindles, the Voyage’s 6” high resolution
300ppi display is made with e-ink technology (higher the ppi the sharper and
more crisp the image and in this case letters). With e-ink, it will not cause
that uncomfortable glare as you would experience if you read off a regular tablet
and consumes minimal battery. However, this means that the display is in 16-level
grey scale (black and white).

The Voyage has an adaptive light sensor
that will automatically adjust the brightness of the screen to your
surroundings. Other specifications include a 4GB in-built memory that is enough
to store a few thousand books, Wi-Fi enabled, weighs 180g, and can last up to six weeks with just
a single charge!

Price:
Starting from US$199

First and foremost this is the only e-book
reader that comes in ivory, onyx and espresso which makes the Kobo standout a
little more than the rest. The Aura has a 6.8” 265ppi Pearl e-ink screen which
is one of the largest currently available in the market and only weighs 240g. Similar
to Voyage the Aura also has a 4GB in-built memory, Wi-Fi and can last weeks on
just a single charge. However, the Aura differs by offering an expandable
memory slot that gives users the option for up to 32GB of additional memory. In
addition to that, the Aura also has Smartphone compatible apps for Android and
Apple along with in-built games like chess and Sudoku.

Head back to basics with the Nook GlowLight.
Apart from the 6” 212ppi e-ink screen, weighing 175g and other basic features,
what will really attracts me is that because it is from Barnes & Noble, you
will be kept up to date with personalised recommendations. On top of that, it
is absolutely ad free and has a built-in reading light for convenient reading
even in dim light conditions!

Price: Starting from US$89

As most e-book readers are relatively
similar, you got to know what you are specifically looking out for be it the
screen size or maybe level of screen resolution. If you are seriously
considering an e-book reader I would recommend the Kindle Voyage only because
it is one of the most user friendly and widely used brand of e-book reader.
Which also translates to cheaper repair and it would be much easier to seek for
help if needed.

If you are an owner of an e-book reader do
share with us what else is there to look out for and maybe a recommendation if
you have one!

Disclaimer: The above images and trademarks are the sole
and exclusive properties of their respective owners and are reproduced herein
for the purpose of fair criticism and review.