Home / Articles / How This Smartwatch Can Save Millions Of Deaf People

This ingenious Smartwatch could potentially save millions
of lives and make the world we live in, a little safer for the deaf

Loud noises that serve as a warning are
what catches our attention and alerts us of possible dangers around us. Take
for example, a car horning at you to warn you of that the traffic light has
turned green or a suddenly explosion in the city centre. However, for those who
are deaf or hard on hearing, the world is a potentially dangerous place. This
new Smartwatch named BRACER, licensed by Singapore-based social enterprise The
GoodWater Company looks to change the way sounds are being ‘heard’ by the deaf. 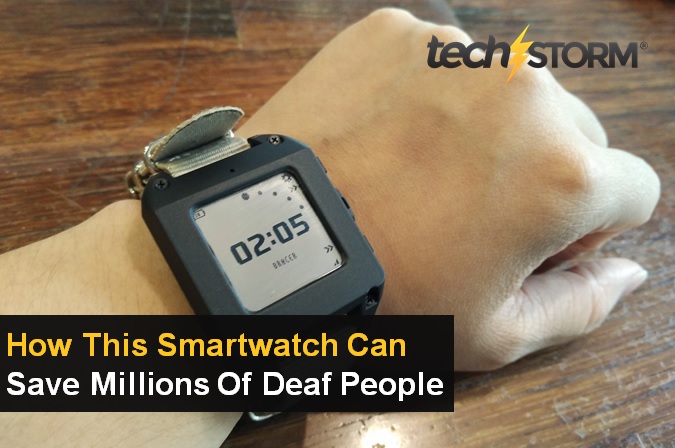 The concept for BRACER is simple, it is a
watch that helps the deaf or those hard on hearing by warning them of loud
sounds around them. The sensors in BRACER are set to a particular decibel
level, any sound that is louder than this pre-set level will trigger the
Smartwatch to vibrate and its LED lights will flash, to warn its user of the loud
noise.

Trials were recently conducted in
collaboration with the SADeaf (Singapore Association for the Deaf), a total of
six members tested BRACER out for three weeks. During this time, BRACER’s
effectiveness in alerting them of danger were tested and results were mostly
positive. ‘However, there is still room for further improvements in terms of
the sound levels which could be more sensitive in capturing dangerous sounds,’ said
Alvan Yap Deputy Director of SADeaf.

The team is also looking to introduce
BRACER to those working who are not hearing impaired by are working in construction,
seniors and youths where they might not pick up loud sounds readily due to
constant background noises or distracted by other tasks. Currently,
BRACER has yet to be mass produced. However, if you want to know more about BRACER
or purchase a pair, click
here. A limited number of  units are up for grabs at a recommended retail price of SG$200.