Ideas alone may not convince you, but experiences will. PAN Studio and
Loop.PH showcase their concepts of a smart city at FutureEverything Singapore.

History has shown that Art and science complement each other
perfectly. And at the recent Festival of Tech, we were given a fresh look at
technology, from a creative’s point of view.

Singapore’s inaugural Festival of Tech was organised by IDA,
a bid to stir our collective imagination. The purpose? So that we may be
inspired to dream about our own high­tech city of the future, and work towards
it.

Drew Hemment is the Founder and CEO of FutureEverything. He
believes in using art and culture to engage the public and businesses alike,
and delivering experiences that demonstrate the potential of technology.
“We’re really passionate about positive social change and enabled by
technology and design,” said Hemment. Hemment and Tom Higham, Executive Director
of FutureEverything, are in town to oversee FutureEverything Singapore, which
forms a significant part of Festival of Tech. 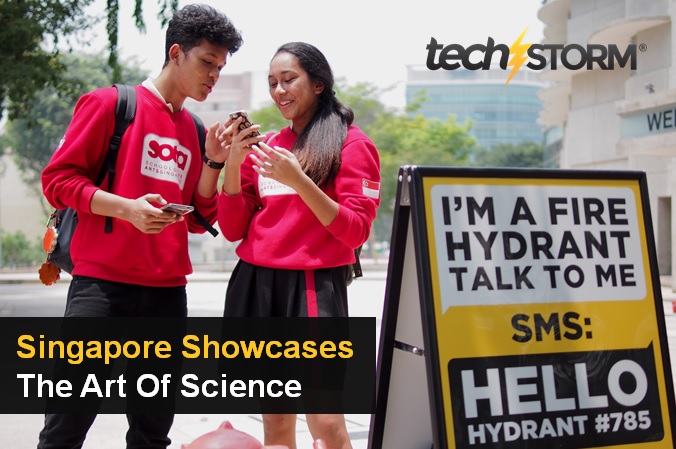 Coming up with potential future concepts based on current
tech isn’t straightforward as the ideas can be abstract. What FutureEverything
wants to do is to make these ideas tangible. “What we do here is actually
create experiences which bring these ideas to life,” said Hemment.

This is best demonstrated by PAN Studio and Spatial
Laboratory Loop.pH; rather than technological showcases, what they provide are
experiences that challenge conventional ‘wisdom’ and norms.

PAN Studio’s Hello Lamp Post is an experiential take on
making Singapore ‘more playful’ by being able to ‘talk’ to everyday objects
around you. Loop.pH on the other hand, turns public space into a private domain
for sleep.

“When you combine art and creativity with technology,
you often have a very good way to engage people, and that’s not just for the
sake of promotion,” said Higham. “It also helps research and development,
and science – it helps people explore new technologies from all angles.”

“It’s kind of a testbed for these prototype projects
that we’re trying to tip over the edge [ed’s note: go mainstream],” he adds.

Sam Hill and Ben Barker are founders of PAN Studio, which
specialises in experience installations with an emphasis on user interaction.
And the idea behind Hello Lamp Post, was to have a conversation with everyone
else in the city via everyday street objects.

The project first came to be as a response to a brief
looking at ideas to make the city more playful. “As a studio we were very
interested in a couple of themes. The first theme was the idea of (city) space
and memories. When you walk through a city space it can be a bit like leaping
through the pages of an old diary,” said Hill. 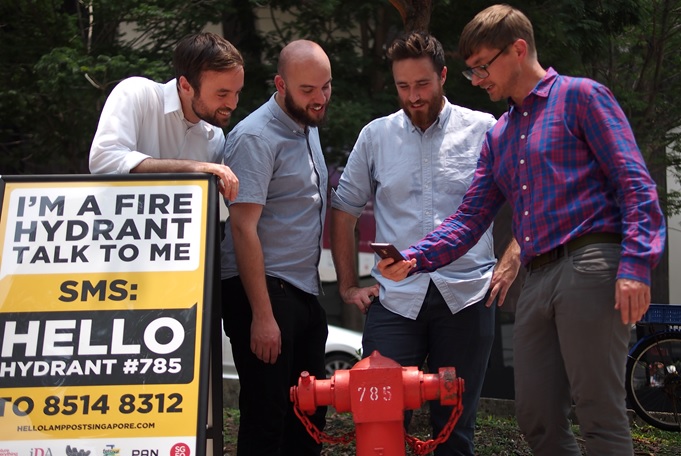 They then hit upon the idea of having a system where people
could share, immerse, and talk about those memories. They realised also that
they could make use of street furniture, as it had a unique code, and this is
something that could be found all around the world.

“What we did is a very ‘Lo­Fi’ system; we don’t want anyone
installing an app,” said Hill, “You immediately dive in, and you use SMS
messaging in order to have a conversation.” Not only was it simpler, it was
also flexible: it’s actually possible to still have conversations with objects
that aren’t in their lists – assuming if they missed out on one – as long as
there’s a unique number.

But as it is, there are so many things that you can talk to.
Bus stops, fire hydrants, utility boxes; even manholes. Really. Manholes.

Ingeniously, with more interaction, the street furniture will
come around to talk specifically about their local area, and will open up to
you on a ‘personal level’. For example, a fire hydrant may ask you to look
around, and say, “I can’t look behind me, can you tell me what’s going on
behind me so I can find out?” As the system accumulates more information, it
will start to bring up information specific to that area. And if you keep
talking to an object, it will open up and ask you more personal questions, like
what your beliefs are, and it will also ask you to share your memories and
anecdotes. If you return to an object five or six times it might ask you, ‘are
we friends now?’

Hello Lamp Post has been run in many cities like Tokyo,
Austin, Bristol and Manchester. In the case of Singapore, the conversations
have been centered around the future of the city and what everyone’s hopes and
aspirations were. There’s also interest in whether the project has potential as
a research tool; a legitimate way of gathering information and analysing public
sentiment.

“It’d be nice to see this rolled out in long term, with
many cities simultaneously, maybe having cross communication between cities. I
might be asked a question and then I reply, and then I find out what people’s
responses are like in New York, or Kyoto, or Vienna.”

The Chronarium essentially means a place to appreciate time,
and which Rachel Winfield, Co-founder and Creative Director of Loop.pH calls a
‘sleep laboratory’. The Chronarium is an entirely new commission, and this is
its first ever public appearance.

“We really like taking scientific research and then bringing
it into public domain, and do public engagement work,” said Winfield,
describing Loop.pH’s direction. “Over the past few years we’ve been working on
projects that look at restorative place­making – how can you bring communities
of people together to transform a place in public.”

Their body of work includes projects that examine urban
agriculture (MetaboliCity) as well as water scarcity (Horticultural Garden),
and The Chronarium is no different and seeks to educate people on rest and
relaxation; it challenges the notion of what constitutes good rest, as well as
where you should be having it. 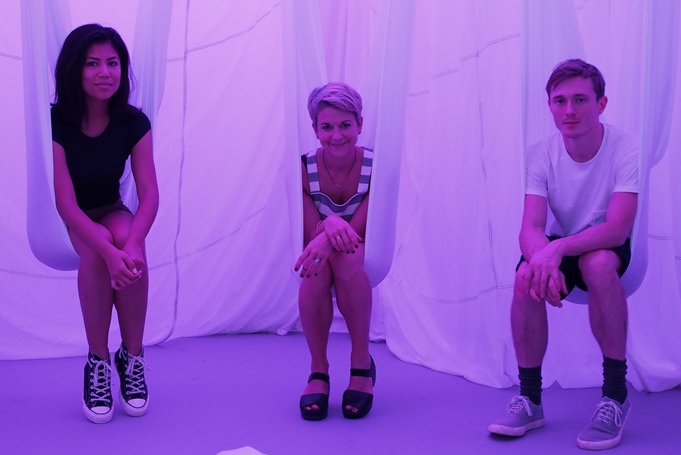 The team that put this exhibit together was also a
demonstration of what the festival ultimately hopes to achieve – collaboration
and a shared imagination between different disciplines.

“We worked with a neuroscientist, we’ve worked with a
world­leading sleep expert, we’ve also worked with a meditation expert who had
been a Buddhist monk for seven years, so i think it’s very exciting when you
bring these very different perspectives and people together because (not only
do) you get empirical science and technology together, you also get a poetic
and sensual side of it,” said Winfield.

The studio itself looks like a serene art space, but behind
the curtains and drapes (almost literally), Winfield and her team controls the
environment using tech – specific light frequencies, sound frequencies – that
aims to reset your circadian rhythm for better quality sleep. The aerial
hammocks – of which there are 10 – are designed to give you a sense of weightlessness
as you lie within. The soundscapes, developed together with music composer Anna
Meredith, have a specific frequency that entrains your brain into different
relaxation states; starting from something active and energetic, before moving
down to pink noise, which is used to induce a very specific brain state.

While the science behind The Chronarium may be sound (pun
not intended), Winfield stressed that ultimately, The Chronarium isn’t focused
on being a science experiment: “It’s certainly very experimental, but
really it’s about public space. There is empirical scientific research that
goes into it, which shows what certain lights can do, what certain sounds frequencies
can do, but what we’re interested in is looking at how this works in a public
space and how you can get groups of people to actually use it.”