Home / Articles / Tech x Venture, Where All The Fun Is At

Packed with more than 200 inventive start-ups and investors in its audience, Techventure 2015 pulls out all its stops for its opening day

Already into its 19th edition, Techventure 2015 provides a platform where innovative start-ups and investors gather to both network and build strong lasting partnerships which can help accelerate ideas into life.

Techventure was first launched in Singapore back in 1996 by the National Science & Technology Board, but has been under the care and organisation of the National Research Foundation (NRF) Singapore since 2010. 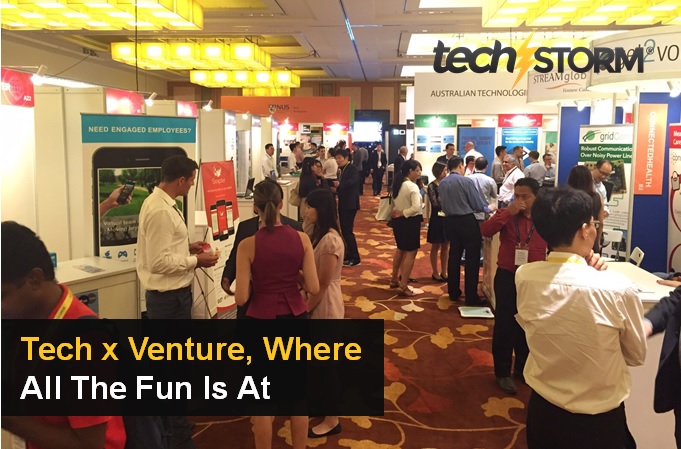 Although Techventure is an event held in Singapore, it is as much of an International start-up event as it is Asian. This year, there are over 1 000 local and international delegates comprising of entrepreneurs, angel investors and venture capitalists, from countries like China, Finland, Japan, Korea, Russia, UK and US were just some who attended the event.

This year, Techventure 2015 has gathered more than 160 inventive local and international start-ups that cover a myriad of areas which include, Medical Technology, Clean Technology, Environment, Information Communication Technology and Interactive Digital Media.

Techventure 2015’s Guest-of-Honour Dr Vivian Balakrishnan, Singapore’s Minister for the Environment and Water Resources, and Minister-in-Charge of the Smart Nation Initiative, opened the event earlier this morning to a packed auditorium where he reiterated Singapore’s commitment and grand vision of being a truly SMART nation.

‘Smart Nation is about improving the quality of life, creating more opportunities for everyone and building stronger communities in the midst of greater diversity through the intelligent application of technology and knowledge,’ said Mr Balakrishnan. In his speech, he also spoke about the importance of building a tight network ecosystem, the need to exploit new technology for the betterment of society at large and how it is not only ideas that matter but more importantly how they are being utilised.

Stay tuned for our top 5 fresh and inventive picks out of the 160 participating start-ups from Techventure 2015.