Home / Articles / Twice The Entertainment With This Two-Sided TV

More than your regular OLED TV, LG has unveiled an OLED TV that is two in one

LG is elevating their OLED TV status with their new and maybe a little flamboyant dual-screen OLED TV that they have unveiled during the annual IFA (Internationale Funkaustellung) 2015 exhibition that was held in Berlin earlier this month.. 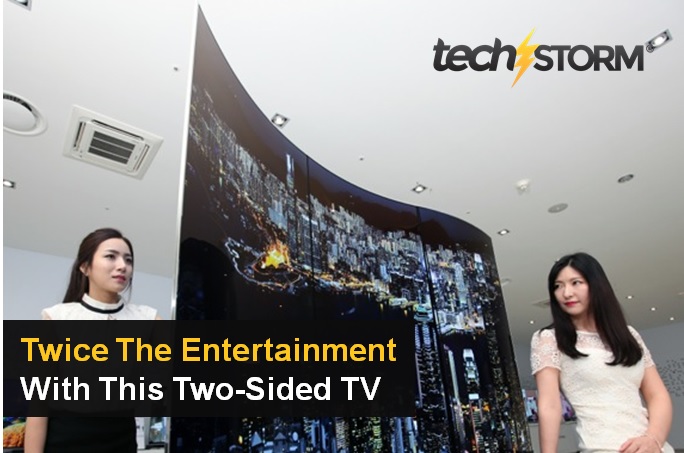 The IFA is a large scale annual exhibition where who’s who of the consumer tech world gather to showcase their product line up for the following year. With exhibitors that include technology giants like Samsung, Panasonic, Nikon and LG to mention a few, this is one of the key technology exhibitions of the year for the true techie at heart.

LG has been on the front line when it comes to TVs amongst other devices, with a particular emphasis on OLED TVs. This time around it is no different, LG has developed a dual-screen OLED TV which is not just curved but shaped like a sine wave of sorts.

Although, the dual-screen OLED TVs showcased at the IFA were quite large to fit a regular household, we are quite positive that it is just a matter of time before it gets scaled down a little to fit. Just think about this, you could be watching your favourite sitcoms on one side of the TV, while your parents watch their soap dramas on the other without having to snatch or argue over TV time.

One significant feature of the OLED TVs that sets it apart from the rest is that, it is able to give you the blackest black, whitest white and true to life colours like no other TV can due to its build. In short, once you have experienced OLED TV, you will find it extremely hard to go back to either a SUHD or LED TV.