Home / News / ‘You Are Never Done Raising Your Child, Right?’

Simply
put for those of you who are not familiar with crowdfunding, it is where any
Internet user can finance creative projects, movie ideas, technology innovations
or almost anything under the sun, for as low as US$1 as a minimum pledge for
some projects. A couple of forerunners in this crowdfunding space include Indiegogo,
Crowdrise, GoFundMe and more importantly in the context of this article,
Kickstarter.

What
is noteworthy about Kickstarter is that their three founders Charles Adler,
Perry Chen and Yancey Strickler all came from artistic backgrounds. Since its inception,
they have gathered more than 2 billion dollars in pledge funding from over 9.7
million pledgers and have helped 94,314 projects come to life – that’s 94,314 dreams
that might not have seen the light of day. Kickstarter started back in April
28, 2009 and the rest is pretty much history. 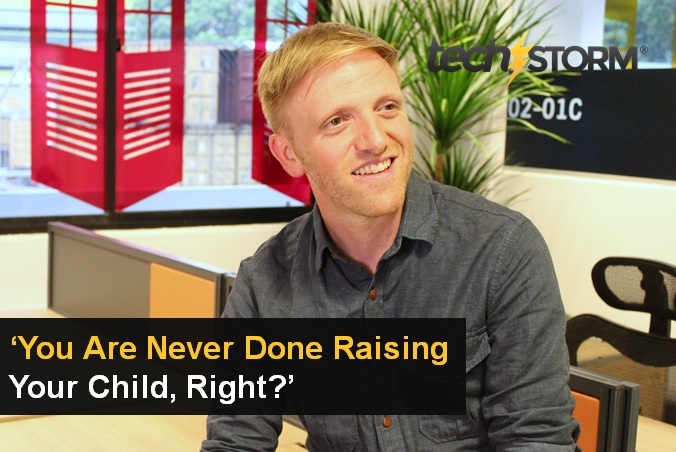 We
caught up with Charles Adler, one of the three co-founders and Kickstarter’s former
Head of Design, who was invited by NUS Enterprise for a fireside chat at Block
71 in Singapore last week. Tech Storm’s new video presenter Ki’ern Tan scored a
chance to speak with the man himself.

KT: What are some of the challenges that
you have faced, working and launching a tech company?

CA: I don’t really know if I consider
myself an artist. I don’t what I really consider myself, because I don’t really
consider myself an entrepreneur. I think generally when starting a company, it
is sort of an interesting process in solitude. You are usually paranoid and you
don’t share your idea. And yet, you also want and desire feedback for that
idea, so it is a pretty dark existence for a long time.

In
this aspect of this of, I guess they call it passion. This desire to kind of
keep pushing forward and accomplish the mission that you are trying to
accomplish. Or change the world in the way that you want it to make the change.
There is a bit of a psychology to that, psychosis to that which keeps driving
you. So, there is this tension between the solitude of protecting that idea and
the tenacity that it takes to getting that idea out into the world.

KT: Now, what made you leave Kickstarter
after five years?

CA: So I think it is pretty simple. I
was turning 40 and had spent 7 years building Kickstarter with my co-founders
up to that point and building the team around the platform. We had accomplished
a lot, I will admit that I didn’t feel like I was necessarily done.

But
you are almost never done, right? You are never done raising your child, right?
And for all of us I think it was definitely our baby. As a guy who is turning
40, I wanted to see what else I could do and I more time and freedom to
explore.

“You are
usually paranoid and you don’t share your idea. And yet, you also want and
desire feedback for that idea, so it is a pretty dark existence for a long
time.”

KT: So what are the three biggest
lessons that you have taken from Kickstarter?

CA: One is focus, I think it is really
easy to be distracted as an entrepreneur. Everyone is giving you advice when
you do actually share that idea that you have and it is coming from all ends of
the earth. It is very easy to be consumed and distracted by that advice.

Focus
and then the connection back to why you took that leap of faith in the first
place. What was it that got you to the point to quit the job that you had and
just focus entirely on this thing, or even start the project at all – if it was
a moon lighting project.

KT: Did you ever imagine when you first
started, that Kickstarter would be able to clock over one billion dollars’
worth of pledge funding?

CA: I think there are always those late
night dreaming moments when you want to have exploding growth. But you know,
the reality was that we want to help out the friends around us that were
artists, makers, designers and engineers that couldn’t get project off the
ground, or couldn’t get projects to see the light of day. That bumped us out,
that depressed us.

KT: What are three of your most
significant ways, that you think Kickstarter has changed the lives of creators
and inventors?

CA: That is an interesting one. I think
ultimately Kickstarter is about creative self-expression, creative control and
in keeping the control in the hands of the creator, the creative that brought
that idea to life. And if anything I think that, that’s probably the most
important component. That person has sole responsibility and sole creative
control of where their vision takes them. They can fill that vision up to
whatever their dream was.

“I think there
are always those late night dreaming moments when you want to have exploding
growth.”

KT: So what was the most memorable
project for you?

CA: That’s the unfair question. There
isn’t a single one. I mean there are projects from the very early days that you
know I have a lot of love for, because they take the chance on this quirky
little thing that we have launched. So there is a different kind of love for
those.

Then
there’s those that you know put us on a bigger map, those that took on of a
little bit more of viral success. Still there are all these amazingly beautiful
projects that maybe you don’t see in the press and then there are ones that you
see in the press. Those that are nominated for an Oscar, or the half dozen or
so that make it to Sundance and do incredibly well at Sundance – at the film
category at least.

CA: Yeah, well I have been spending a little
more time with my family, which is pretty awesome and have been travelling
quite a bit. I spent 7 years doing this Kickstarter thing and I worked really
hard in those years to make sure that I didn’t lose the plot, was sort of
grounded and connected to why we exist in the first place.

After
7 years of sipping some Kool-Aid, you tend to get a little bit drunk. I wanted
some time to reflect and step back. So, travelling is a big part, a huge part
of my life. Seeing other cultures, it’s a big reason why I am here

KT: So final question, the most interesting
question as well. So, are there any new start-ups that we can look forward to?

CA: There are a lot of new start-ups to
look forward to, what they are? I don’t know yet. That’s kind of a tough
question, I don’t really have a great answer for you on that one.